We don’t often get snow in Alabama, so it is an epic event when we eventually get some.  Everyone is outside, making snowmen and forts, sledding on sheet pans and cardboard, having snowball fights, and of course making snow cream.  But rather than make the tradition snow cream, I made snow cream with a southern twist: sweet tea!  I used Peaches and Cream Tea from the amazing Piper & Leaf and it was delicious.  You can purchase it at the link above and I highly recommend that you do!

The only snag I ran into was placing a bowl outside to catch clean snow and then forgetting about it.  At first I thought someone had stolen my bowl, but then I realized I just had to dig it out from the snow.  At least I had plenty to work with!

To make the Sweet Tea Snow Cream I just added cold tea, heavy cream, and raw sugar to fresh snow.  It was so tasted I made a second batch as soon as I ate the first one. 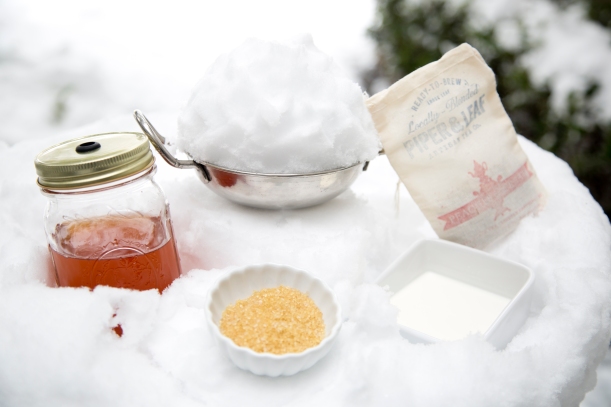 Also check out my post for traditional Snow Cream.  Includes photos of gnomes!