It is said that the goddess Aphrodite aka Venus was born after Cronus castrated his father Uranus and threw his … um … er… ‘member’ into the sea. (ouch!) Sea-foam formed where Uranus’s genitals fell into the water and from this foam Venus sprang forth, fully formed and a goddess to be reckoned with.

I don’t believe the craft beer, Heady Topper, has quite as dramatic of an origin story, but the beer is as revered, loved, and sought-after as the great Venus herself. I recently had the pleasure of encountering this highly ranked, elusive beer while on a trip to see my family in upstate New York.

While in New York, I was posting various photographs of local brews to my Instagram account and a friend jokingly commented that if I wanted to bring her back a souvenir, she would love some craft beer.

“Heady Topper if it’s available! Never had it.. only heard the folklore,” she said.

Sure, why not, I thought. Little did I know the journey she was sending me on. The ‘folklore’ comment should have been my tipoff.

Over the next couple of days, I glanced at the grocery store’s beer selection but didn’t see anything, so I decided to research it. It was then that I learned how complicated it was to get this beer.

Heady Topper was ranked by Beer Advocate as the # 1 beer starting in 2013. It is currently ranked # 2 on the list, but could move back to the number 1 spot at anytime. It is hard to get because it is a world-class beer that is only distributed in Vermont. Heady Topper often sells out within the hour and people wait in long lines to get it. There are even a story of 1 can of beer selling for as much as $42. After learning all of this, I was ready to throw in the towel and just send my friend a post card, but my Dad got quite inspired about getting his hands on some. We had a trip planned to Burlington, so he started watching the brewery’s website to see where Heady would be distributed.

He learned that it would arrive at City Market on Tuesday.

On the big day, we got a late start and didn’t get into Burlington until 12:30 pm. I figured we had missed out, but then we saw this sign.

The most important part of the sign was that the beer wouldn’t be brought out until 2pm, so we hadn’t missed out! My father was very excited and after a visit to customer service to inquire about the appropriate Heady purchasing protocol, he promptly got in line. I kept on asking if he was sure he wanted to wait for an hour for a beer we’d never even heard of a week earlier, but he was adamant that he was in it for the long haul.

My mother and I went across the street to a local bookstore as my father bonded with his line-mates. Some were newbies like himself, but others were Heady fanatics that raved about how much they LOVED this beer.

At one point, a woman came by and observed the growing line of Heady shoppers.

“You know, there is perfectly good beer that you don’t have to wait in line for!” she exclaimed.  She shook her head at their ridiculous fanaticism.

As she walked away the man behind my father said, “That used to be me, wondering why someone would stand in line for beer. Then I had Heady and now here I am, standing in line.”

By 2pm, over 50 were waiting for the beer. There was no limit on how much a customer could purchase, so everyone had to hope the person in front of them didn’t buy everything. My father was 5th in line, so he was able to get his prize quickly: a case of Heady Topper.

My mother and I met with him at a nearby restaurant to celebrate his victory. I noticed that the menu featured another beer from The Alchemist brewery so I ordered it.

“I’m sorry,” said the waitress. “We’re all out, but we do have Heady Topper.”

“Perfect!” I said, and my mother, father and I all ordered some.

We toasted to my father’s vigilance and to Heady Topper’s excellence. We drank it out of the can, as recommended, and then walked around Burlington with a pleasant buzz.

On the ride home to New York, a double rainbow smiled down upon us. Heady Topper IS magical!! 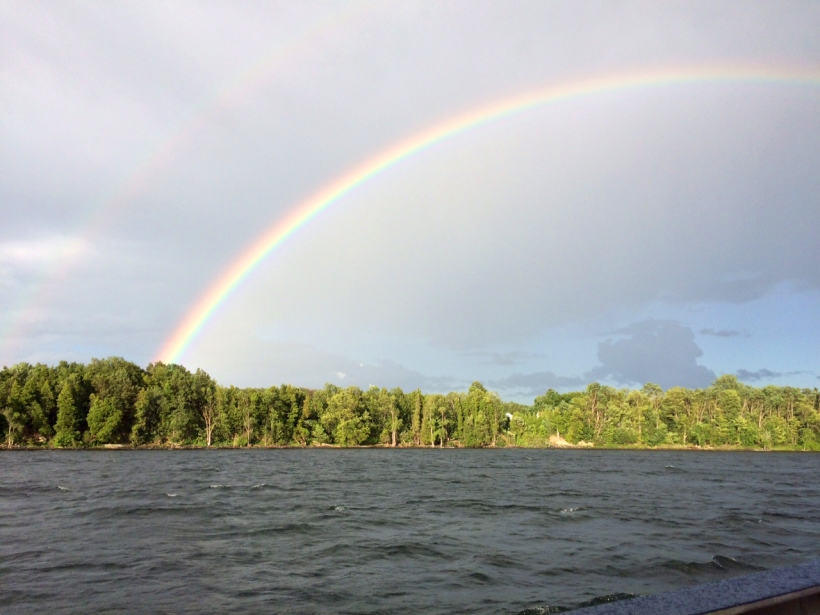 I sent my friend, who initiated this adventure, a picture of the magical brew. 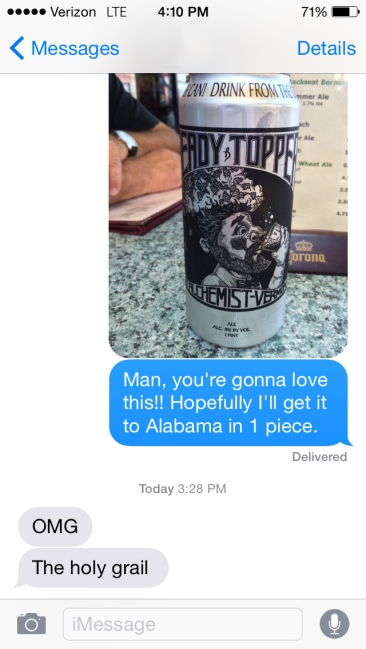 I carefully wrapped two hoppy gems in bubble wrap and tucked them in my checked luggage for the flight back to Alabama.

Despite my trepidation, they made it home unscathed and still cold!

One thought on “Search for the Elusive Beer: Heady Topper”